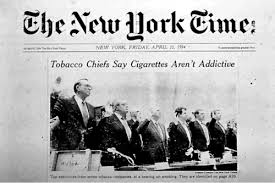 In a decision that many commentators believe will have long ranging implications for companies that are not truthful about the risks inherent with the use of their products, Judge Kessler orders Big Tobacco to come clean and amit its misdeeds in public pronouncements. Below are links to stories covering this groundbreaking decision.

One major television network and most of the primary print media outlets reported on a ruling Tuesday in which a Federal judge’s ordered big tobacco companies in the US to dispel past advertising that downplayed the health effects of smoking by publishing corrective statements.

ABC World News (11/27, story 5, 0:30, Sawyer) reported, “An extraordinary punishment for the country’s big cigarette companies today: A Federal judge said they lied and they have to take out ads and admit it publicly.”

Bloomberg News (11/27, Schoenberg, 1M) reports US District Judge Gladys Kessler in the District of Columbia on Tuesday ruled that big US tobacco companies “must publish warnings with their products, in advertisements and on their websites saying they lied to the public about the health hazards of smoking.” Kessler was ruling on the “text of so-called corrective statements proposed by the Justice Department.”

The AP (11/27, Share) reports that although Judge Kessler ruled in 2006 that “she wanted the industry to pay for corrective statements in various types of advertisements,” her ruling Tuesday “laid out what the statements will say.” Kessler stipulated that each “corrective ad is to be prefaced by a statement that a federal court has concluded that the defendant tobacco companies ‘deliberately deceived the American public about the health effects of smoking.” The corrective statements are “part of a case the government brought in 1999 under the Racketeer Influenced and Corrupt Organizations.”

According to USA Today (11/27, Winter, 1.71M), Kessler is requiring the tobacco companies to publish corrective statements in five topics: The “adverse health effects of smoking; the addictiveness of smoking and nicotine; the lack of any significant health benefit from smoking ‘low tar,’ ‘light,’ ‘ultralight,’ ‘mild,’ and ‘natural,’ cigarettes; Defendants’ manipulation of cigarette design and composition to ensure optimum nicotine delivery; and the adverse health effects of exposure to secondhand smoke.” Additionally, Kessler mandated that each statement must “begin with a ‘preamble’ that briefly explains the court ruling, states the companies must make the statement and then declare, ‘Here is the truth.'”

CQ (11/28, Norman, Subscription Publication) notes that Tobacco “firms also would be required to say on websites and in cigarette box inserts that smoking kills on average 1,200 people a day and that more people every year die from smoking than from murder, AIDS, suicide, drugs, car crashes and alcohol combined.”

Reuters (11/28, Ingram, Baertlein) adds that the tobacco firms are also engaged in a separate court battle with the Food and Drug Administration over the agency’s proposal for graphic warnings on tobacco product labels. The tobacco giants contend that such a requirement would be a violation of their rights to free speech.

The AP (10/31) reports, “The Sacramento Kings have settled a lawsuit over an exercise ball the teams says exploded and injured a player.” According to the AP, “Roger Dreyer, the attorney who represented the NBA team and injured swingman Francisco Garcia, told the newspaper the settlement amount was confidential,” but described it as extremely favorable… END_OF_DOCUMENT_TOKEN_TO_BE_REPLACED

The ABA Journal (11/14, Weiss, 346K) reports the 1st US Circuit Court of Appeals ruled that “baristas who work at Starbucks in Massachusetts are entitled to collect $14.1 million because their tips were shared with supervisors.” According to the court, “the shift supervisors had managerial responsibility, making them ineligible to share in tips under the… END_OF_DOCUMENT_TOKEN_TO_BE_REPLACED

The Wall Street Journal (11/15, Esterl, Subscription Publication, 2.08M) reports that the US Food and Drug Administration on Wednesday acknowledged that it has received reports of 13 deaths during the last four years that may be related to the caffeinated energy drink 5-Hour Energy, which is distributed by Living Essentials LLC. According to the Journal,… END_OF_DOCUMENT_TOKEN_TO_BE_REPLACED

This website will help you figure out what if any benefits you may be entitled to. http://www.disasterassistance.gov/ DisasterAssistance.gov – Home

If you are in a declared disaster area you may be entitiled to financial relief to help rebuild your home, make repairs and receive housing assistance. FEMA puts out an excellent primer which may be accessed at http://www.fema.gov/pdf/assistance/process/help_after_disaster_english.pdf. The table of contents is as follows: Overview of the Individuals and Households Program……………………………..1 Types of Assistance…………………………………………………………………………………….1… END_OF_DOCUMENT_TOKEN_TO_BE_REPLACED

Be cautious in dealing with representatives of companies involved in catastrophic disaster. Also, caution and judgment should be exercised in dealing with representatives of insurance companies. Be particularly careful before signing any papers in connection with the promise of the payment of a given sum of money. Likewise, a lawyer may solicit your case, but… END_OF_DOCUMENT_TOKEN_TO_BE_REPLACED

The following series of short questions and answers put together by the SC Bar Association. Please ask a lawyer in your state for specific advice concerning your circumstances:   GENERAL CONCERNS for the the types of advice they may be asked to give.   1. Q. A. If a healthy tree falls across a… END_OF_DOCUMENT_TOKEN_TO_BE_REPLACED