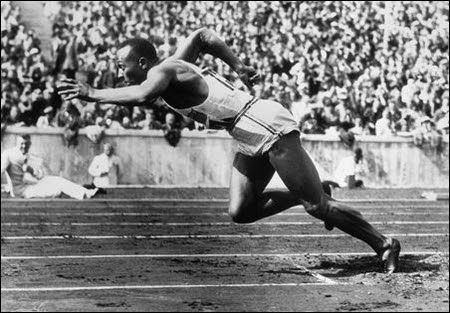 Today in history marks day in 1936 when Jesse Owens won the 1st of 4 Gold medals in 100 m @ the Berlin Olympics in front of “The Master Racist” Adolf Hitler and his Aryan fanatics.

“I don’t care about the Olympics. It’s like watching gym.”—Bill Maher

“The Olympics would be better if every athlete carried a sword. If competitors had sharpened blades, equestrian events would at least be watchable, and gymnastics would require a lot more strategy.”—Robert Weintraub

“I have a problem with that silver medal. It’s like, 'Congratulations, you almost won. Of all the losers, you’re the number one loser. No one lost ahead of you.'”—Jerry Seinfeld

“I called my grandmother and told her she could win a gold medal because they have dusting in the Olympics now.”—Charles Barkley

“Naturally the U.S. trails in gold medals because every time we win one, we hand it over to the Chinese to pay off our debt.” –Stephen Colbert

“So far China has won the most gold medals, ladies and gentlemen. The Chinese athletes can't wait to get home and show the medals off to the kids who made them.” -Conan O'Brien

“Some people are saying that the reason Michael Phelps isn't doing so well is because he let himself get too out of shape. I just have to say that I have been watching the Olympics, and if that guy is out of shape, I have been dead for five years.” -Conan O'Brien

“A dozen swimming events have already been completed in the Olympic competition. I wonder where they got the name 'Speedo.' It doesn't sound like a bathing suit, it sounds like a breakfast cereal for meth addicts.” -Craig Ferguson

“The European countries are really hoping to do well in the Olympics. If they win gold medals, they can use them as cash.” –David Letterman

“This year's Olympics will be replacing the women's beach volleyball bikinis with uniforms that are less revealing. The stricter dress code was made to appease the conservative nation of 'Buzzkillistan.'” -Conan O'Brien

“The opening ceremonies will feature the parade of athletes from 107 bankrupt nations.” -David Letterman

“Even though the Olympics take place during Ramadan, some Muslim athletes said they will not fast during games. Then, after sampling the British food, they said, on second thought, fasting sounds good.” –Conan O'Brien

“Mitt Romney will travel to London where he will attend the Olympics opening ceremony . Of course it's going ot be weird when they're announcing all the countries, and he's like 'Got a bank account there, got one there, two bank accounts there.” –Jimmy Fallon

“How about those Olympic uniforms? They're made by Ralph Lauren and they're beautiful. They're colorful, they're odd. I mean they look like the cast of 'Glee.' They look like the entire navy of Monaco.” –David Letterman

“Well, President Obama and first lady Michelle went to see the U.S. Olympic basketball team play Brazil the other day. And during the game, they were put on the kiss cam. At first, they didn't kiss and the crowd booed them. Then the camera went back to them. And they finally did kiss. Isn't that amazing? A politician in Washington caught on camera kissing a woman he's actually married to?” –Jay Leno

“Well, Harry Reid and other members of congress, they're just furious over this Olympic uniform deal. He says we should burn the uniforms, and it's an embarrassment and a disgrace. Not as embarrassing as congress constantly borrowing money from the Chinese, but still embarrassing.” –Jay Leno

“Have you seen the Olympic uniforms? It's for the American Olympic team and it's berets. To me, nothing says America like a guy in a beret. Look at our founding fathers, they all wore berets.” –David Letterman

“Last night I went out for Chinese. I picked up a Team USA Olympic uniform.” –Jay Leno

“I guess you heard about this; the U.S. Olympic Committee is coming under fire after it was revealed that the uniforms for Team USA to be worn in the opening ceremony were made in China. Turns out they were made by some of the same kids who could beat us in gymnastics. That's the worst part.” –Jay Leno

“Mitt Romney announced that he's going to the Olympics in London next month. No word yet on whether he will be rooting for Switzerland, Bermuda, Luxemburg or the Cayman Islands. I'm not quite sure.” –Jay Leno

“Speaking of the Mitt Romney, there are reports that he may attend the London Olympics this summer. Romney’s psyched to watch wrestling – cuz it’s the only place where someone changes positions more than he does.” –Jimmy Fallon

JUST ONE LAST PUN: A reporter meets a man carrying an 8 ft-long metal stick and asks, “Are you a pole vaulter?” “No,” says the man, “I’m German. But how did you know my name is Walter?”

Posted with Blogsy
← Bayer AG says Yasmin settlements have increased to $402.6M.
What Ever Happened to the J&J that Recalled Tylenol from the Market →
Top