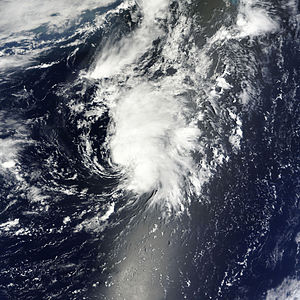 The following memo from the insurance industry may be helpful in guiding you.

Information provided: The status of various state departments of insurance positions on the application of “hurricane deductibles” related to hurricane/post-tropical cyclone Sandy.

State insurance departments have begun issuing bulletins and opinions regarding the applicability of percentage windstorm or hurricane deductibles in the aftermath of hurricane/post-tropical cyclone Sandy.

Additionally, some states require NOAA or the NHC to issue a hurricane warning in the state.  With Sandy, the National Hurricane Center did not issue hurricane warnings north of North Carolina.  While hurricane watches are typically announced 48 hours in advance of the expected onset of tropical storm-force winds, and warnings 36 hours in advance, the National Hurricane Center decided on October 27th that there would be no advisories issued for Sandy north of North Carolina.

The following is an excerpt from the NHC statement:

The Connecticut Insurance Department issued a notice on October 30th indicating that based both on the lack of a hurricane warning and lack of hurricane-force wind speed readings, deductibles will not apply to Sandy claims.

The Maryland Insurance Administration issued a bulletin on October 30th announcing its position that deductibles do not apply to Sandy because there was no hurricane warning issued.

According to a New York Department of Financial Services press release on November 1st, hurricane deductibles in New York insurance policies should not be triggered by Sandy because the storm did not have sustained hurricane-force winds when it impacted the state.

While it has been reported that Acting Commissioner Kobylowski communicated to the insurance industry that the hurricane deductible trigger does not apply in New Jersey because the National Weather Service downgraded Sandy to a Post-Tropical Cyclone before it reached land in New Jersey, there has not been an official release, notice or bulletin from the Department at this time.

On October 30th, the Rhode Island Department of Business Regulation, Insurance Division released an industry alert announcing that based on information issued by the National Weather Service, “a “Hurricane Warning” was not issued for the State of Rhode Island. Therefore, pursuant to R.I. Gen. Laws § 27-76 and Insurance Regulation 110, Section 4F, insurers may not impose a hurricane deductible on Rhode Island residential claims.”

The RAA will keep members apprised of developments related to hurricane deductibles and pass along all official Department correspondence on the matter.