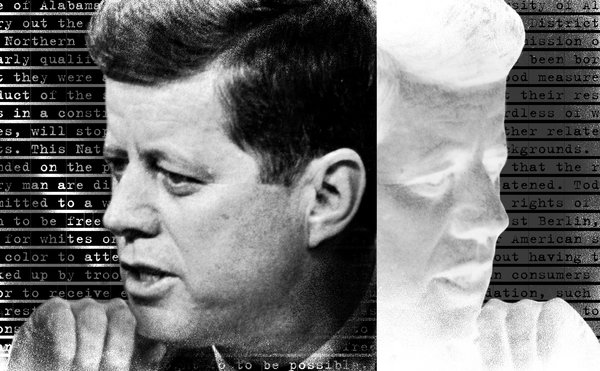 I did not want June to pass without remembering what John John Kennedy did on June 11, 1963 as recounted recently by the NY Times.

That morning, Gov. George Wallace, in an effort to block the integration of the University of Alabama, made his futile “stand at the schoolhouse door.” That evening, Boston N.A.A.C.P. leaders engaged in their first public confrontation with Louise Day Hicks, the chairwoman of the Boston School Committee, over de facto public school segregation, beginning a decade-long struggle that would boil over into spectacular violence during the early 1970s. And just after midnight in Jackson, Miss., a white segregationist murdered the civil rights leader Medgar Evers.

But the most important event was one that almost didn’t happen: a hastily arranged speech that evening by President John F. Kennedy.

Kennedy had dabbled with the idea of going on TV should the Alabama crisis drag out, so when it ended, his staff assumed the plan was off. But that afternoon he surprised them by calling the three networks and personally requesting airtime at 8 p.m. He told his speechwriter Theodore Sorensen to start drafting the text, but shortly before he went on air the president was still editing it.

The president had been routinely criticized by black leaders for being timid on civil rights, and no one knew just what to expect when the cameras started filming.

Kennedy began slowly and in a matter-of-fact manner, with an announcement that the National Guard had peacefully enrolled two black students at the University of Alabama over Wallace’s vociferously racist objections.

But he quickly spun that news into a plea for national unity behind what he, for the first time, called a “moral issue.” It seems obvious today that civil rights should be spoken of in universal terms, but at the time many white Americans still saw it as a regional, largely political question. And yet here was the leader of the country, asking “every American, regardless of where he lives,” to “stop and examine his conscience.”

Then he went further. Speaking during the centennial of the Emancipation Proclamation — an anniversary he had assiduously avoided commemorating, earlier that year — Kennedy eloquently linked the fate of African-American citizenship to the larger question of national identity and freedom. America, “for all its hopes and all its boasts,” observed Kennedy, “will not be fully free until all its citizens are free.”

Perhaps the most significant part of the speech came near the end, when Kennedy, borrowing directly from the movement’s rhetoric, recognized the civil rights struggle as part of a political and cultural revolution sweeping the land — again, an obvious point to anyone on the other side of the 1960s, but not to a white population still living in the stifling bliss of the Eisenhower era.

Kennedy not only reported the revolution, but invited Americans of all backgrounds to engage in the kind of civic activism that reflects the tough work of democracy. “A great change is at hand, and our task, our obligation, is to make that revolution, that change, peaceful and constructive for all.”

Nor was this just stirring rhetoric: Kennedy’s announcement that he would introduce comprehensive civil rights legislation and spur school desegregation beyond its frustratingly glacial pace gave teeth to his historic address.

Kennedy’s speech was almost immediately overshadowed by Evers’s murder. Two months later the March on Washington would further render it a forgotten artifact of the civil rights movement’s heroic period.

Still, the speech had real consequences. A little over a week later, Kennedy followed through on his promise to submit strong civil rights legislation to Congress, which he pushed aggressively until his assassination in November 1963.

Kennedy’s death made him a martyr for many causes, and in a cruel twist, it provided a huge boost to the civil rights bill, which his successor, Lyndon B. Johnson, signed on July 2, 1964. But without the moral forcefulness of the June 11 speech, the bill might never have gone anywhere.

The speech also set the tone for how presidents should address civil rights. No longer could they dance around the issue, qualifying it as a strictly regional or legal or economic issue (though many would later try to do so). The power of the White House, and of the federal government, was on the side of the struggle.

And it continues to resonate today. Barack Obama’s March 2008 “race speech,” delivered amid the Jeremiah Wright controversy, has been rightfully applauded for its nuanced depiction of contemporary American race relations. And yet it must be read within the context of Kennedy’s address: both reflected and defined the tenor of race relations at a moment of great tension and change.