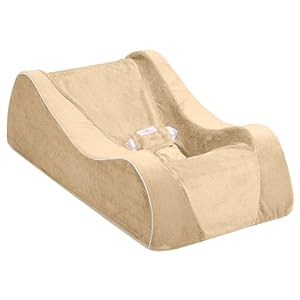 The AP (12/6, Kerr) reports that “the government is taking action against the makers of a portable baby recliner called the Nap Nanny after five infant deaths.” The story notes that the US Consumer Product Safety Commission “filed an administrative complaint Wednesday alleging that the new model of the Nap Nanny, called the Chill, and two earlier versions 'pose a substantial risk of injury and death to infants.'” The CPSC is now “seeking an order that would require Nap Nanny maker Baby Matters LLC of Berwyn, Pa., to notify the public about what the agency deems a serious product defect,” and it also wants the firm to offer consumers a full refund.

The Boston Globe (12/6, Lipka, 250K) “Consumer Alert” blog reports that “The lawsuit was filed today against Baby Matters, LLC, of Berwyn, Pa., which makes Nap Nanny and Nap Nanny Chill. The CPSC said it was aware of the deaths of four infants in Nap Nanny Generation Two recliners and another in a Nap Nanny Chill.” The blog post adds, “The first set of Nap Nanny recliners were recalled in July 2010 – and consumers were offered an $80 coupon for a newer model recliner as well as improve warnings and instructions.”

CNN (12/6, Sperry) reports on its website that “the Nap Nanny recliner is designed for sleeping, resting and playing and includes a shaped foam base with an inclined indentation for the baby to sit and a fitted fabric cover with a three-point harness,” according to the CPSC. CPSC Commissioner Nancy Nord is quoted as saying, “My heart goes out to the parents and families of children who are injured or lose their lives in incidents associated with consumer products.”

← New Jersey schoolkids sickened by relaxation drink.
Who Is Responsible If YOU Did Not Have the Correct ” Sandy” Coverage? →
Top